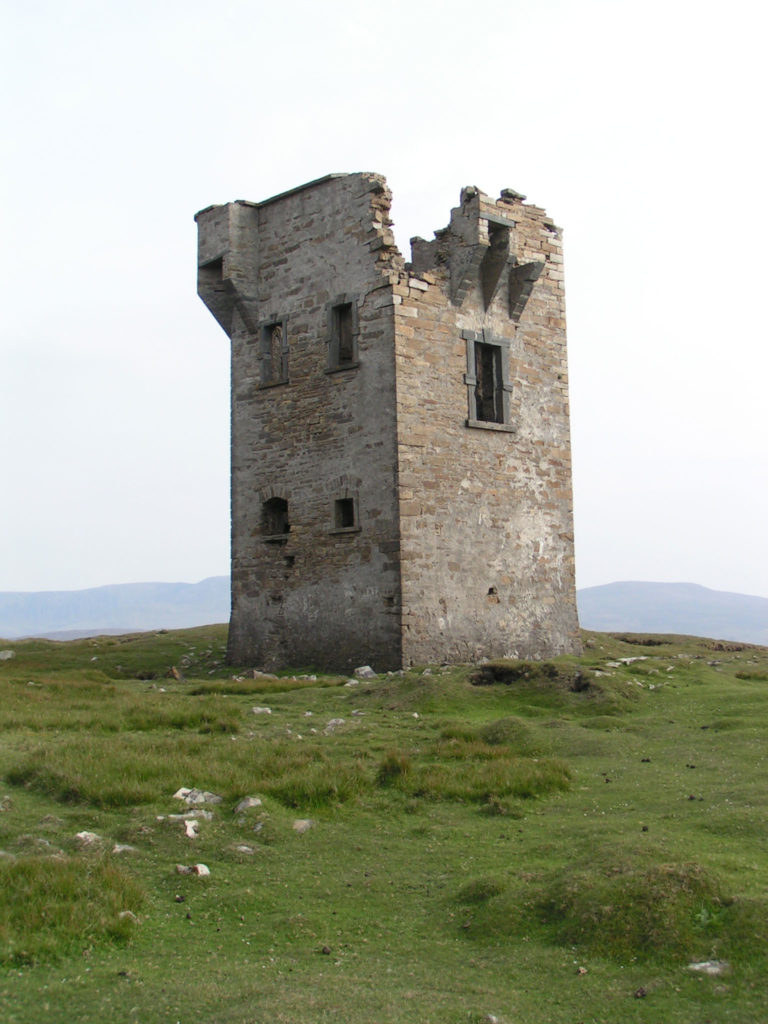 The history of Glencolumkille spans some 5,000 years, back to the Stone Age when the first farmers toiled the land here. The only traces of these early settlers are from the Court Cairns, examples of which are found at Malinmore, Cloghanmore and Farranmacbride. These Court Cairns were burial places and were built with huge stones, forming a court area with burial chambers or galleries. A later group of settlers in the Stone Age left the remains of their style of tomb-building… the Portal Dolmens, which usually consist of several standing stones surmounted by a capstone.

At Malinmore there is a group of six Portal Dolmens, reputed to be the finest monument of its type in Ireland. The next group of people to leave traces of their habitation were those of the Celtic period, dating from of 300 B.C. onwards. Traces of their monuments, Dúns, Raths or Liosanna… circular earth or stone works, can be seen above the Silver Strand at Malinbeg and on the promontory of Doonalt.
With the coming Christianity to Ireland from the 5th century onwards, tradition has it that Columba (521-597 A.D.), born into a leading Donegal dynasty and who played a major part in the development of the Church in Ireland, Scotland and the North of England, established a monastery here and gave his name to the Glen. Most of the Standing Stones, many of them Cross-inscribed form what is known as the Turas Cholmcille.

The Stones may have had pre-Christian connotations but were adapted to Christian usage. There are fifteen stations or stops in the Turas, which include Colmcille’s Chapel, chair, bed, wishing stone and Holy Well at Beefan. The Turas is performed each year on the 9th June, St Columba’s Day.
There are signs of other early Christian settlements, marked by the present ruins of the Chruch of St Kevin at Malinbeg and that of Tearnpall na Manach at Kilgoly. The Church of the Spaniard in Faugher was built in 1729. The story is told that a shipwrecked Spanish sailor was given the Last Rites by the local priest and that he gave the priest some gold coins and asked him to build a church, hence the name Cill an Spainnigh. Another Spanish Church was built in the 18th century just west of Kilcar.

The present Church of Ireland built in just North of the earlier one, had its Colcktower erected in by Henry Musgrave, the only surviving member of the Musgrave family, owners of the Glencolumbkille Estate since 1867. The Church occupies a prominent position in the valley and around its site traces of an early Christian settlement exist, notably in the souterrain or underground refuge, beneath the Graveyard. Charles Inglis, first Anglican Bishop of Nova Scotia, was born in Glencolumbkille in 1734, when his father was Rector here. There is a tradition that Daniel MacGonagle, Bishop of Raphoe (1562-1589), a native of Killybegs and one of the Irish Bishops to attend the Council of Trent (1545-1563) is buried in the Churchyard. However, it is considered that the tradition refers more correctly to Ronald MacConghaile, Rector of Glencolumbkille in 1555, and reputed to be a brother of the Bishop.

The Catholic Church in Cashel village was built in 1832 and the new Nave was added in 1880. In the Churchyard is the grave of Canon Phil Boyle, remembered especially for his great merciful work during a catastrophic ‘flu epidemic which struck the area in 1918.
There can still be seen in Glencolumbkille examples of vernacular architecture, notably in the surviving thatched cottages, with their particular feature of the rounded roof, the thatch being held down by a network of ropes (sugans) spaced over it and fastened to pins beneath the eaves and on the gables. Built of local stone and whitewashed these buildings harmonise with the landscape. Examples of industrial and agricultural architecture survive in the byres and out-houses and in the remains of lime kilns, mills and forge.

Visitors can re-live the past through the medium of the Folk Museum complex., where there are replicas of buildings used by local people over three centuries. This Museum Centre was founded in 1967 as part of the cultural revival inspired by Farther James McDyer, who has been involved since the 1950’s in co-operative endeavours and developmental projects in Glencolumbkille.
Glencolumbkille is a place of colours and sounds and kindly people and has attracted over the years painters, writers and composers. In his book “Farewell My Youth”, Sir Arnold Bax (b. 1883), Master of the King’s Music, penned the following lines:-
“I like to fancy that on my deathbed my last vision in this life will be the scene from my window on the upper floor at Glencolumbkille, of the still, brooding, dove-grey mystery of the Atlantic at twilight; the last glow of sunset behind Glen Head… the calm slope of Scraig Beefan, its glittering many-coloured surface of rock, bracken and heather, now one uniform purple glow”.

The coastline of Glencolumbkille is varied and dramatic, embracing as it does huge, sheer cliffs, sea-sculpted rocks and islets, tiny inlets where local fishermen harbour their boats, and sandy, safe beaches. At Malinbeg, with Rathlin o’Beirne Island a mile offshore, marking the Northen entrance to Donegal Bay, we have one of the finest beaches in Ireland, the sandy safe, Silver Strand, while at the North-Eastern extremity of our coast we have Tormore, 482 feet, Ireland’s highest sea stack. In between and along an indented coast lies Teelin (Malinmore) Head, the most Westerly point on the Donegal coast, with Rossan Point close by at the entrance to Glen Bay. At the head of this bay is a good, sandy beach, backed by dunes, with a Car Park and the Folk Museum Centre adjacent. Glen Head rises to a height of 769 feet and is surmounted by its Watchtower. Just North of here is the Sturral, a jagged, knife-edged promontory.

At Port an inlet some 1 ½ miles further North-East, coopers lived in days gone by serving the fishermen along this part of the Donegal coast. Beyond Port is Toralaydon Islet (319 feet) and an awe-inspiring variety of rock shapes along the coast to the sea stack of Tormore. Our coastline ends at the Claddagh Mor and Glenlough. Glenlough, now deserted and with no access by road, is a valley of haunting beauty, running down to the sea between Port Hil and the slopes of Slieve Tooey.
Coastal walks abound and, whilst caution must be exercised along cliff tops, one is rewarded with breathtaking views… across Donegal Bay to the coasts of Sligo and Mayo, with the mountains of Ben Bulben, Knocknarea and Nephin prominent, and, on a clear day, the Stags of Broadhaven are visible at the North-Western extremity of Co. Mayo. To the North-East are views of Aranmore Island and the coastline of the Rosses.

The seas of the Western Approaches off our coast have seen and made history. In Glencolumbkille we have touched on this history in peace as well as war. From earliest times coastwise trading was a feature and early Christian settlements, such as that on Rathlin O’Beirne island, were probably established by seafaring monks. In the sixteenth century, the waters witnessed vessels of the Spanish Armada being driven by contrary gales towards the head of Donegal Bay and their eventual wreck; others managing to make Killybegs to repair, victual and attempt an outward voyage to neutral Scotland; others still attempting to keep to the West off our coast.

One ship, which came dangerously close to our coast in those gales of 1588, was the DUQUESA SANTA ANNA. She managed to clear Malinmore Head and Tormore but was wrecked further North-East at Rosbeg in Loughros More Bay. Her Commander and Company marched from there, through Ardara to Killybegs and joined another Armada ship, the GIRONA, which was victualling there under the protection of MacSweeney Bannagh, the local Chief.
In October 1588 the GIRONA sailed from Killybegs with 1300 on board. She laid her course further to the West and cleared the entire coast of Donegal, only to be wrecked on the Antrim coast with the loss of all but nine lives. In the folklore of Glencolumbkille there is a story that Bonnie Prince Charlie was secreted in Malinmore while ‘on the run’ after the defeat of his Highland Army at Culloden and that he later embarked in a French frigate from Poll-an-Uisce, near Glenlough.

The facts of history are otherwise (the Prince and his retinue sailed from Loch-nan-Uamy in the West of Scotland on 20th September 1746 and laying course to the West of Ireland arrived at Roscoff nine days later) but, nevertheless, the story must have some foundation and, in any event, highlights the Irish support for the Jacobite Cause. This remains in music and song, such as “Mo Ghile Mear” and, here in Glencolumbkille, in a unique version of “The Bonnie Moor Hen”.
Across the expanse of Donegal Bay from Malinbeg, three frigates of the French Navy, flying British colours and commanded by Admiral Savary, arrived off Killala in August 1798. General Humbert and over one thousand troops disembarked at Kilcummin, joined the Irish Revolutionaries, established the Republic of Connaught and added a short but colourful page to Ireland’s military history.

With the Act of Union in 1800 and the ongoing Napoleonic threat, the Authorities built Watchtowers along the coast as part of the North-West defences of Ireland. The towers at Malinbeg and Glen Head were built in 1804 and are part of a chain of twelve such towers extending from St. John’s Point, near Dunkineely, to Malin Head in the extreme North of Donegal. These watchtowers were all in sight of each other and were manned by a Naval reserve, known as the Sea Fencibles. If you stand at the tower in Malinbeg, looking North-East you can see Glen Head Tower, while to the South-East the Tower on Carrigan Head, near Teelin, is visible. Shipwrecks frequently took place along this coast, leading, eventually to the establishment of a lighthouse on Rathlin O’Beirne Island in 1864. Today, the light is automatic, its red sector covering the Sound and adjacent dangers, while the seaward light is white. The former ‘Dwellings’ of the Lighthouse families are situated opposite the Post Office in Glencolumbkille.

The most famous wreck on our coast, now enshrined in “Dhá Chead de Cheoltaibh Uladh” (Enri O Muirgheasa), is that of the SYDNEY, a ship of 1,118 tons, built in 1860. She was on passage from Quebec to Greenock with a cargo of timber and was driven off course in a North-Westerly storm. She was wrecked at Carnas Binne, just North of Glen Head on the 16th October, 1870. Of her crew of twenty-one, only two survived, making their way up the cliff face and down into Glencolumbkille … “o nach iomadaigh arus agus roilig ghranna o sholus Arann un a Chladaigh Mhoir”.

With the increase in road transport, coupled with the mining of Donegal Bay during the First World War, maritime traffic decreased, although a fleet of smacks was locally owned in nearby Teelin, together with a fine Trading Ketch, the MILLBAY. Indeed, many of the smacks had been built locally at Derrylahan. Today, inshore fishing is still a feature and the waters are traversed by motor fishing vessels inward bound for Ireland’s premier fishing port of Killybegs or outward bound for the fishing grounds. One can still see merchant shipping in the short-sea trades and vessels of the Irish Navy and Lighthouse Service plying the waters on the Bay. On Rossan Point is the site of the old Semaphore Station used by the Coastguard in days gone by. There also is the Look-Out post of the Coastwatching Service, established during the Second World War…reminders of a history of war and peace in these waters.